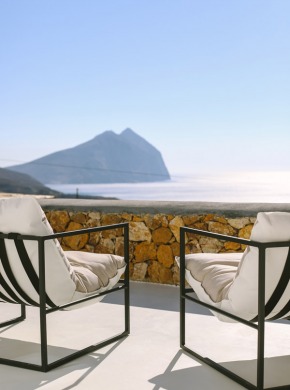 Mythology wants the island to have surfaced (in Greek, the word Anafi is derived from “anafainetai” which means to arise) from the depths of the Aegean to offer solace to the Argonauts, following a command by the god of music himself, Apollo the Anafian.

An island in the heart of the Archipelago, blessed with unique beauties. Mythology wants the island to have surfaced (in Greek, the word Anafi is derived from “anafainetai” which means to arise) from the depths of the Aegean to offer solace to the Argonauts, following a command by the god of music himself, Apollo the Anafian. For centuries, it was a life-saving piece of land in the middle of the sea visited by many travelers. Today, it continues to be a safe haven for those travelers versed in the beauties of the Aegean. Sandy beaches to the south and pebble beaches to the west, tight stone paved streets, white painted houses with abundant gardens, stone domed buildings, the ruins of a Venetian castle and dazzling bright churches by the hillsides. The beauty of the Aegean distilled in a single island.

Yspeli is located on the south side of the island, around 2.5 kms from the Chora and 4 kms from the port; at a site that offers unencumbered views of the sea, with the Cycladic sunlight reflecting off the unforgiving landscape. The beaches next to Ypseli are Katsouni, dressed in a fine grain sand and crystal clear waters, but also the quiet Flamourou with its imposing rocks, golden sand and baby blue waters. The combination of all the above will definitely play a catalytic role in completing the experience of your stay at this unique place.

The mountain / symbol of the island is Kalamos, also known as the “Anafian monolith”. It is a limestone rock visible from anywhere on the island and is located on the southeast side. It is connected to the rest of the island via a tiny isthmus, while many have seeked its view, as a means to interact with and achieve internal harmony.

The rock is 460 meters high and is the second tallest rock in Europe after the Gibraltar.

Every year on the 7th of September, the Monastery of Virgin Mary the Kalamiotisa, built in 1715 on the ruins of an abandon fortress at the rock’s summit, becomes a gathering point for an amazing celebration.

Today, the area is defined as a peninsula in the pan-European ecological network of protected areas under Natura 2000, given that visitors can see rare species of flora, as well as geomorphologic elements such as a cave with natural troughs and stalactites, which is approachable via a mountain path.

In the eastern section of the island, at 327 m. from sea level, a hill rises up which in ancient times was home to the city-state of Anafi. Numerous artifacts have been discovered here, such as the tombstone epitaph of the Aigedon family, which can be found in dozens of ancient and historical analyses. The bee is again present here since in the Hellenistic years, the city had created its own currency that had a bee depicted on the one side. Visiting the area will give you the opportunity to see the contours of the ancient walls but also the remains of the necropolis and the sub-level crypts. Roman burial monuments have also been discovered in the area, the most famous of which is the carved sarcophagus found outside the chapel of the Virgin Mary at Dokari. Many of the most important ancient artifacts discovered here have been moved by the Russian navy to the State Hermitage Museum in Saint Petersburg, Russia when they occupied the island as part of the Russo-Turkish war during the late 16th century.

A beautiful beach unique for its waters and surroundings, Klisidi is a sandy beach lined with tamarisk trees that provide the perfect shade.

A short pathways away from Klisidi you will find Katsouni, which you can also reach by swimming around the rock that separates the two beaches. The soft, warm sand and shallow waters are the perfect combination for you to enjoy your swim at this impressive but also quiet beach.

Talking about Anafi, you will inevitably mention Roukounas, with its unending sand and deep blue waters. A quite popular beach, where you can throw away your anxiety and stress, Roukounas provides you with a unique view of the monolith, the impressive rock of Kalamos.

A small gulf, watched over by the church of Agioi Anargiroi, transforms into a welcoming corner for those who love the wildness of nature together with the magic of water. Its shallow emerald-blue waters will make you fall in love again and again.

Having left behind you Agioi Anargiroi beach and guided by a rocky trail, you will reach Megas Potamos beach with its amazing sand and total tranquility.

Engulfed by the shade of Kalamos, situated directly under the Monastery, it is one of the island’s largest beaches. Lying on its rich sand or tiny pebbles, you will soak in the sun after a swim in the invigorating waters of the Aegean. The gulf is called Prasies, while the beach itself is called Monastery.

Golden sand and cool, crystal clear waters await those few visitors who venture to Livoskopos, to create memories that they will carry with them for years to come. It is located on the North side of the island and can be reached via a path that passes through rough landscape. Ask us.

* The aforementioned beaches are just some of our suggestions. There are numerous small gulfs around the island waiting to be discovered, all vying to be your favorite.

The island’s cuisine is an anthem dedicated to locality and seasonality. Don’t miss the opportunity to enjoy the flavors and uniqueness of the island. The basic ingredients for the Anafian table are offered by the sea. Fresh fish, and shrimp and lobster pasta. Lamb in the oven and goat cheese are the treasures given by the island’s livestock. Honey covered sesame sweets using the island’s amazing honey. The same honey which together with pealed almonds create the famous “Koufeto”. Unique to the island are the “koulouridia”, which are balls of dough boiled in goats milk, and the “balothia”, local hand-made pasta that are served with a red sauce and local cheese. Moreover, the “tzonari”, which is salted pork with wine, and the “tsiladia”, pork-head boiled in vinegar and crocus. Crocus also gives the Anafian bread its distinct yellowish hue and also adds dabs of color to the whole island in autumn. And of course caper leaves, samphire and wild chicory fresh or pickled all hold within them the taste of the Aegean.